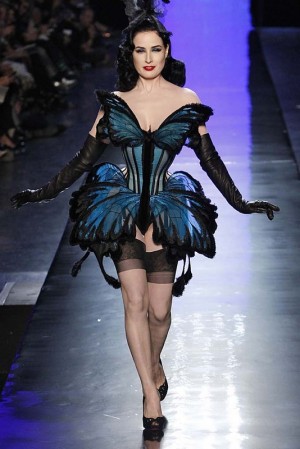 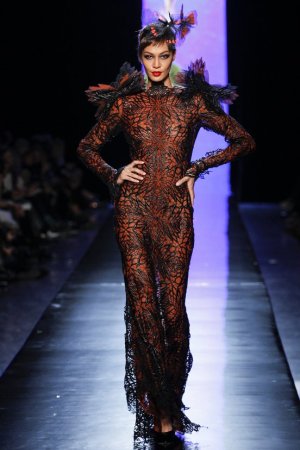 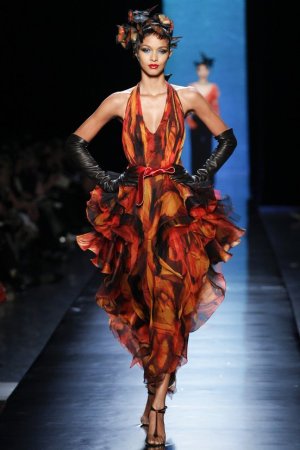 Paris Couture Fashion Week has been well underway for a few days, and I went completely against my normal urge to post Chanel and went straight to what really played with my emotions, the Jean Paul Gaultier runway show featuring Dita Von Tesse. Why? Anyone that gorgeous that sees past the distraction that is Marilyn Manson and finds his soul is truly fascinating.

Have fun with this fun and flirty collection and tell me what you think of the theme.

If you aren’t familiar with FashionTV, this is a good time to check out the present and upcoming runway shows that us mere mortals don’t have access to. There is live streaming, interviews, and anything that is remotely attached to the fashion world. For me, couture is the most fun because it is so creative and over-the-top, and the challenge of dialing it back to reinvent the looks for the real world is like a roller coaster thrill. I really marvel at those who can execute creativity and talent so flawlessly. Sigh… I would wear many of these looks just the way they are with absolutely nowhere to go. 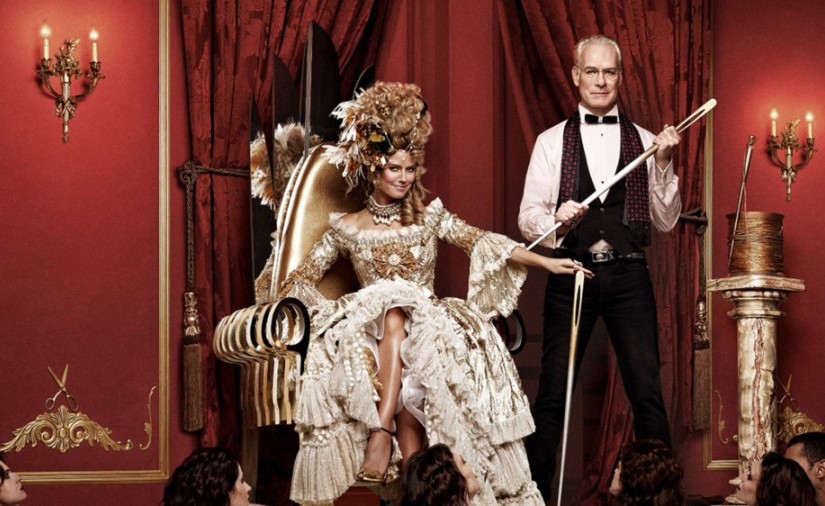 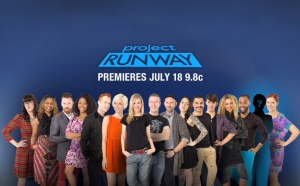 Project runway season 12 started out with a blast with “the unconventional challenge” straight out of the gate, an unusual and cunning move. The designers didn’t even get the chance to settle in before Heidi threw what most would say is the most difficult of challenges at them. Usually, the “unconventional challenge” makes an appearance further down the road and the unconventional material that the designers were to make a garment that represented their aesthetic was the nylon from parachutes that were delivered by skydivers on an airport runway. Sweet!

The fans bought Kate from season 11, better known as Project Runway Teams, back for a second chance,and no one wants her there because she has an obvious advantage, but not enough to overshadow anyone else’s talent, in my opinion. This years accessory wall from Belk, me no likey. What I do like is no team challenges smothering the designers and the new changes, especially the fact that Tim Gunn will be on hand during runway and judging to give the other judges, Heidi Klum, Nina Garcia,Zac Posen, and the weekly special guest, in this case, Kate Bosworth, his opinions.

The first runway was great, except that the judges really should have let Mr. Sustainable,  a.k.a., Timothy Westbrook, 24, from Milwaukee, WI, go home. He is an “annoying”sustainability-focused fiber artist” according to the Project Runway blog. Hey, I didn’t write it but I am not going to argue with the truth either. Without getting into his issues too much, let’s just say there is a lot of hypocrisy and insecurity going on. And please find time to feel sorry for his poor model…

Los Angeles designer Bradon McDonald, 38, was this seasons first winner with a flowing, pastel color-blocked gown that highlighted the sheer trend perfectly. Angela Bacskocky, 33 – Richmond, VA, was sent home for being boring and unoriginal, which is not what this season is going to be if this teaser is any indication of what is to come. The drama started before the first episode with a controversial promotional billboard that was banned in L.A.

Another new addition is fan interaction with the new on-screen feature, PlayRunway, which will allow fans to use their smartphones, tablets and computers to share their reactions to episode storylines, design challenges and judging decisions. Fan interaction is increasingly implemented into reality competition shows lately. Social media is the difference between life and death when it comes to fan driven competition shows.

Other changes include, an anonymous runway; the judges won’t know which designer did what until after the points are added up, the judges will look at the designs up close and personal as part of the judging process; not good for any designer with design flaws and glue jobs that would have been hidden previously, and Tim has the power to rescue one designer from elimination for a second chance.

This seasons prize package is the biggest one yet. This is a list of the prizes that are worth over half a million dollars straight from Project Runway’s site on Mylifetime.com:

As part of the winner’s prize package, this season’s champion will receive $150,000 from GoBank, the award-winning new bank account made to be used on a mobile phone; $50,000 of next generation technology from HP and Intel to help enable their creativity and launch their new business; a year’s supply of Resource Natural Spring Water and an all-expense paid, luxurious spa retreat for two to the exotic Maldives, courtesy of Resource Water; a chance to design and sell an exclusive collection at Belk; a complete sewing and crafting studio from Brother Sewing and Embroidery; a fashion spread in Marie Claire magazine; a 2014 Lexus IS 350; a $100,000 fabric allowance from Tide Pods to inspire fashions that truly pop; and a $50,000 styling contract with L’Oréal Paris. It is a prize package worth more than half a million dollars. The model paired with the winner of “Project Runway” will receive a fashion spread in Marie Claire magazine and $25,000 from L’Oréal Paris.

This season is going to be SO good, and I can hardly wait to see which one of the remaining designers will fail to measure up. I haven’t picked a favorite yet but who do you think is going home?