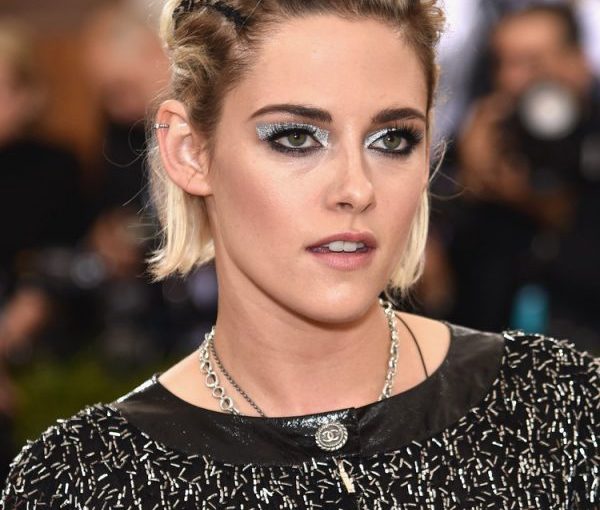 There were a few outstanding looks at the 2016 Met Gala: Manus x Machina event, but I really liked Kristen Stewart’s look; there was something provocative about it and I barely recognized her. Kristen Stewart’s interpretation of the Manus x Machina theme was really more focused on her hair and makeup.  Participants were asked to embrace fashion and technology; the future of fashion. I’m not sure she embraced the technical aspect of the challenge, but she doesn’t look like she took any fashion steps backward.

She’s what I consider an enigma; there is something so confident yet panicked about her. She’s one of those rare celebrities that isn’t desperate for attention. While scrolling through the Gala photos on The Cut, I had to stop and stare because it didn’t look like her, but I could see her in her outfit if that makes any sense. In other words, she pulled it off, and she did it in Chanel, but a lot of the attendees did. Chanel was a prominent fixture.

Stewart wore a dress from the Chanel Fall 2016 RTW collection (actually my favorite dress from that collection) but it goes beyond her dress; it was the whole package. It was minimalist; barely-there lips, one earring (she doesn’t seem to wear earrings), the necklaces she wore were hidden beneath her dress, and her hair was haphazard. Her makeup featured silver graphic eye shadow and dark liner. Her presentation wasn’t overdone or cartoon-ish, it was still fashion-forward. She could have easily pulled this look together herself without a stylist.

She seems to favor Chanel, she wore it to the Met Gala in 2013, she skipped the Met Gala in 2015 in favor of a Chanel show in Seoul, where she wore a look from the Chanel 2015/16 Cruise collection, and again for this year’s Met Gala. I understand her Chanel obsession and personally, the look from the Seoul show would have worked at the 2016 Met Gala, perhaps better than the one she wore.

I created StylEnigma in 2014 to celebrate the beauty of individuality and creative personal expression/presentation. I love the idea of being a canvas and expressing myself by transforming into the embodiment of my mood - to the mood I want to be in. I am fascinated by different standards of beauty and style and fashion incorporates instinctively incorporates both. I use writing as a form of continued education. I've never been into cliques or trends because I've always believed that personal style supersedes trends, I've never been a follower or stressed about being liked, and what I'm thinking usually escapes my lips before I can stop it. I love dark colors like black and midnight blue. I own so much black clothing it looks like I'm in a perpetual state of mourning - and I probably am. I love nail art. In fact, I started this blog because of a Nailasaurus nail art post, and before that, I owned a nail and skincare salon, so there will be a LOT of nail art. As a lupus patient who has been riding this global crisis solo, I have acquired a vicious plant habit and currently have approximately 95, including propagations. I frequently critique nonsense, ponder the human condition, dodge the bullets and jump over the obstacles placed before me all while learning how to make ADHD work for me because at the moment, it isn't. I am also learning how to create alternative forms of content and maintain my sanity because life frequently tests it. This will be fun. Let's do this! View all posts by StylEnigma